Kenya Airways pilots have issued a strike notice. Through their organization, the pilots say they have had enough of the…

Kenya Airways pilots have issued a strike notice. Through their organization, the pilots say they have had enough of the frustrations from the current management.

Kenya Airways has already acknowledged receiving the strike notice from the pilots and promised to “respond to it in due course.” This will not be the first strike to hit the ailing “Pride of Africa.”

Here is the letter of acknowledgment from Kenya Airways management: 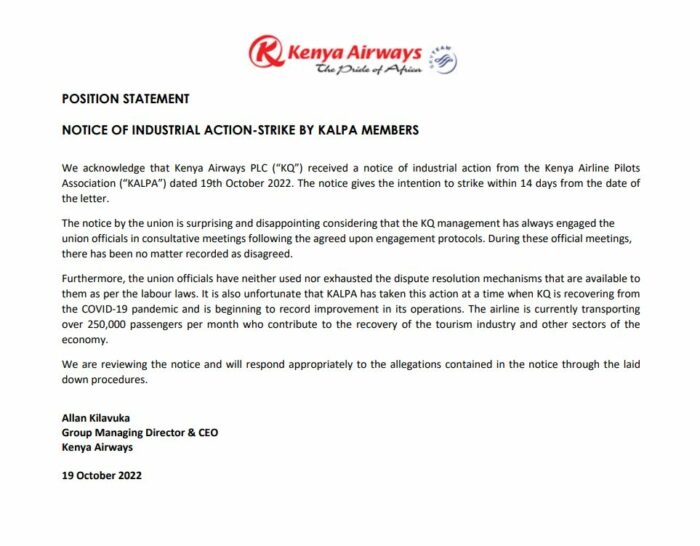 For years, there has been a push and pull between the Kenya Airways management and the pilots over pay, refresher courses, and general work conditions.

Pilots have also accused the airline’s management of making them work for extra hours, putting the lives of passengers at risk because of pilots’ fatigue.

The current government, through its Transport CS nominee, Kipchumba Murkomen, has promised to revive Kenya Airways by splitting the Kenya Airways passenger and cargo divisions.

Kenya Airways has been making massive losses for over 10 years now. The current government says the losses are a result of the massive corruption within the airline’s management.

A junk of Kenya Airways cash goes into paying for the leased airplanes from some of the richest families in the country. The new government plans to cut them off.

You Can Use A Letter Of Credit To Finance Your Business

Kenya Airways has continued flying into massive losses. For the year ended December 2021, the once…

Air Operators Write To MPs Over KQ And KAA Merger