Blue Band has been in East Africa since the 1950s and is even older than in countries like Kenya. Trusted… 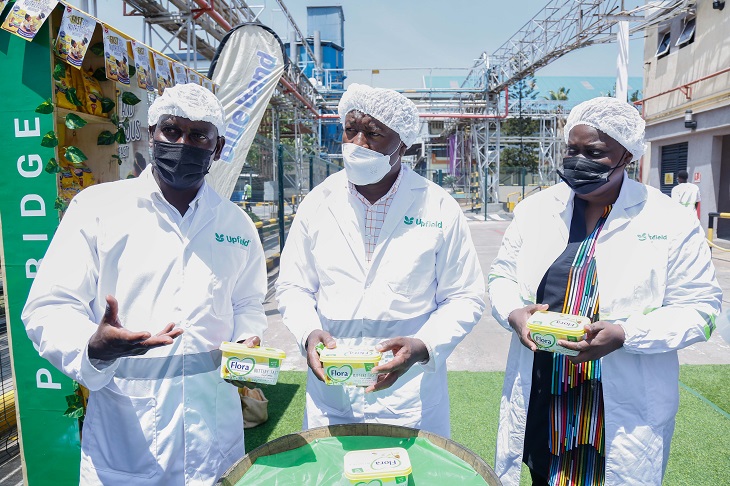 Blue Band has been in East Africa since the 1950s and is even older than in countries like Kenya. Trusted by generations of families, many grew up with Blue Band margarine being part of their daily meals, either spread on bread or used as an ingredient in Chapati, Ugali, or Githeri.

Blue Band has however evolved over the years, especially under its current owner Upfield, to satisfy the needs of consumers better and impact the local community and economy positively.

As a global plant-based company, Upfield is the number one producer of plant-based spreads and cheeses with more than 100 brands, including iconic brands Flora, Rama, Proactiv, Becel, Country Crock, Violife, and African jewel, Blue Band.

The company sells its products in over 95 countries and has 15 manufacturing sites throughout the world, one of which is in Kenya. Upfield is focused on delivering healthier, plant-based products that are great tasting and with superior quality.

Many are not aware that margarine like Blue Band and Flora are plant-based and made from many natural ingredients, especially carefully blended healthy plant oils like Canola, from which the East African Blue Band is made.

Margarine was previously given a bad name because of the past hydrogenation process used in its making. However, hydrogenation is no longer used in making most margarine and it no longer contains trans fats. Instead, it now contains healthy unsaturated fats which are good and necessary for the growth and development of children.

Blue Band also contains essential fats Omega 3 and 6, which the body needs but cannot produce itself. It is also a good source of Vitamins A, B1, B2, D, E, and Niacin which deliver essential nutrients to the body.

According to the World Health Organisation, more people are shifting towards plant-based diets for reasons relating to health as well as ethical considerations about climate change and animal welfare. Upfield’s vision for ‘A Better Plant-based Future’ puts it right at the center of this shift as it champions the benefits of plant-based diets. The company is supporting the aspirations of consumers by providing quality, tasty alternatives they can enjoy. Globally, the company has also made a commitment to evolve to more natural ingredients in the production of its all products.

In East Africa, Upfield is innovating and recently expanded its portfolio to include Blue Band Peanut Butter, Blue Band Instant Porridge and Flora chilled spread; all of which have been well received by consumers.  The company is also investing heavily in the local sourcing of ingredients because it believes in improving the communities where it operates. One of such projects is a Canola oil partnership with Adventure Limited in Kenya which provides the company with Canola oil for its Blue Band fat products. To date the project has impacted over 7000 commercial and smallholder farmers, ensuring sustainable revenue for them while impacting the Kenyan economy positively.

The Blue Band Social Mission also works to make a nutritious breakfast an everyday reality for school-aged children in Africa and beyond. From research, we know that eating a healthy breakfast is linked to better school performance and increased physical activity. It also helps improve cognitive performance, especially regarding memory and attention. Blue Band’s advocacy campaign for healthy breakfasts is being driven with key stakeholders, in schools and online, and is making a real difference in children’s lives in Kenya and across the continent.

Blue Band is made in a top-quality, well-maintained, factory environment. The Kenya factory currently has an A rating of 94.5% in the annual internationally recognized AIB quality audit. The factory has also achieved the FSSC 22000 global safety certification which measures end-to-end food safety management. Upfield’s ingredients are 100% responsibly sourced as the company builds an active relationship with its suppliers and works with them to ensure its supply chain is managed sustainably and ethically.

In 2020, Upfield announced an investment of 50 million Euros into the future of plant-based foods through a state-of-the-art Upfield Food Science Centre in Wageningen, Netherlands. As the authority in the spreads and cheese category which gives the company unmatched experience, know-how, and inspiration, Upfield is innovating to deliver healthier products that are great tasting and have superior quality. When launched, top food scientists & world-class chefs from different continents including Africa will create delicious products to satisfy and delight consumers.

Upfield Managing Director, East & Southern Africa, Peter Muchiri said: “We are committed to producing food products that consumers enjoy while preserving the planet’s resources and reducing our climate impact. Improving the communities and economies of the countries where we operate is also an important part of our strategy. Our footprint across East Africa continues to grow daily due to this strategy as we innovate quickly to respond to consumer demands for quality, nutritious and great tasting food products.”

He was speaking during a fire chat with media from Kenya, Uganda, and Zambia who toured the company’s Nairobi factory.

What Next After Fuel Price Hike In Kenya?