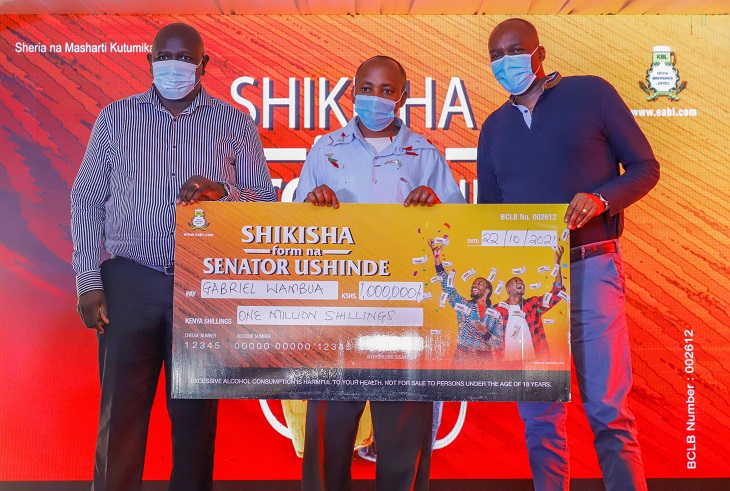 Gabriel Wambua, Francis Sifuna, Edwin Wahisi, Brian Iriri, and Morris Karani from Kiambu, Kangundo, Eldoret, Nairobi, and Meru respectively, each won a 2 million shilling grand prize in the promotion’s grand draw as the campaign drew to a close at Club Image, Uthiru, Kiambu County. They will each take home Sh.1 million and set aside Sh.1 million to a community development project of their choice.

Over 500 customers won Sh.76 million in this year’s consumer campaign, the third in three years by Kenya Breweries Limited’s most successful beer brand, with the purpose of enhancing the lives of loyal customers and various communities as the country recovers from the ongoing Covid-19 pandemic.

Speaking at the ceremony, KBL Managing Director John Musunga said that the promotion’s strategic approach was the result of working closely with suppliers and customers and listening to their concerns about COVID-19’s immediate impact on communities and how to help where feasible.

“From the outset, our campaign has delivered on its promise of providing support, growth, and enrichment to our customers. It gives us tremendous joy to see that it has made a significant difference in the lives of individuals, vulnerable trade partners and the communities in which we operate in especially at this time,” said Mr. Musunga.

The company has teamed with outsourced not-for-profit organizations to oversee the building and construction of the winners’ nominated projects, which will begin in the coming weeks, according to Kenya Breweries’ Managing Director.

Ann Joy Michira, Head of Marketing, Beer East Africa, said: “The promotion was not only about our marketplace growth or loyal customers, but the growth of local communities across the country as procuring of campaign elements for the winners such as home makeovers came from the winners’ localities.”

To participate, consumers were required to purchase two 500ml mugs (either Senator Lager or Dark Extra) in which they were issued with a scratch card. The Consumer then sent an SMS with the unique valid code found under the scratch panel to a 5-digit shortcode i.e., 22110 to get an entry into the competition (One valid code gave one entry).

Senator Keg Lager was among the fastest-growing brands in Africa’s top 150 most valuable brands in a 2020 study by London-based business Brand Finance, leveraging a 10-million-man pool of drinkers and expanding by 88 percent to a brand worth of Sh14.4 billion ($132 million). It has achieved this status as a result of high demand from price-conscious consumers who have switched from home-brewed brews, some of which are illegal, to branded beer.