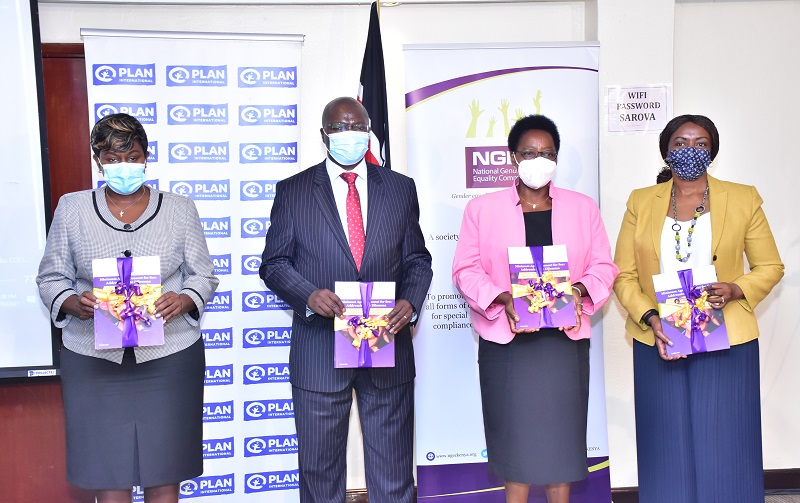 Plan International Kenya in partnership with the National Gender and Equality Commission (NGEC) has officially launched the Minimum Age of Consent for Sex Report that recommends 18 years as the legal age for sex.

Plan International – Kenya Country Director Kate Maina – Vorley, said the report will ensure that the law protects and advances the rights of girls and boys to be protected from all forms of violence, with a specific focus on the need to prevent and respond to sexual and gender-based violence.

“With the rising cases witnessed of sexual violations among children that have led to teenage pregnancies, especially during the lockdown, this report will ensure that our justice system is child-friendly and responsive to the needs of both girls and boys in contact with the law. To this we call out for partnerships in the establishment of child protection units in all counties in Kenya, where girls and boys in contact and in conflict with the law receive the care and support needed through their involvement in court proceedings,” said Kate Maina.

She added that all stakeholders should ensure the facilitation of both formal and informal forums for guidance and sharing of appropriate information on sexuality education for adolescent girls and boys in and out of schools.

The country director commended the Ministry of Labour and Social Protection for the successful submission of the Children’s Bill 2020 to the Cabinet.

Cabinet Secretary, Ministry of Labour and Social Protection Hon. Simon K. Chelugui, who was also the Chief Guest at the event said that the Constitution of Kenya clearly stipulates that a child is an individual who has not attained the age of eighteen years adding that the Sexual Offences Act, No. 3 of 2006 which gives the minimum age of consent for sex as 18, is one such law that is meant protect children from situations where they could be taken advantage of sexually before they reach adulthood.

“From the foregoing, as the Cabinet Secretary in-charge of Children Affairs and based on the Children Bill 2020, I would strongly recommend that the age of consent should not be LOWERED AT ALL, but measures should be put in place to mitigate the predicaments were young boys as opposed to girls are imprisoned for engaging in sexual activities. Besides, there should be clear regulations and the establishment of comprehensive child rehabilitation programs for any children in conflict with the law. In the long term, the government should develop and implement programs that address the sexual and reproductive health of children,” said Hon. Chelugui.

NGEC Chairperson Dr. Joyce Mwikali Mutinda said, “With the launch of this report and implementation by various stakeholders, it favors children below 18 years who are not physically, socially, and psychologically developed to make decisions. The launch of this report adds on to the great effort by state and non-state actors in the overall protection of children’s rights.”

Plan International was involved in the development of the report that saw voices of adolescent girls from Kisumu and Kilifi contributing to the age of consent for sex debate.

In March 2019, the Court of Appeal proposed a law change to lower the age of consent from 18 to 16 years. The rationale for lowering the age of consent for sex according to the judges was that underage girls and boys often willfully engage in sexual relations and that although they may not have attained the age of maturity, they may well have reached the age of discretion and are able to make intelligent and informed decisions about their lives and their bodies. The judges further pointed at the lengthy jail terms imposed on young men convicted of defilement.

SportPesa Puts Ksh 800,000 In Maternal Health To Save Mothers And Children