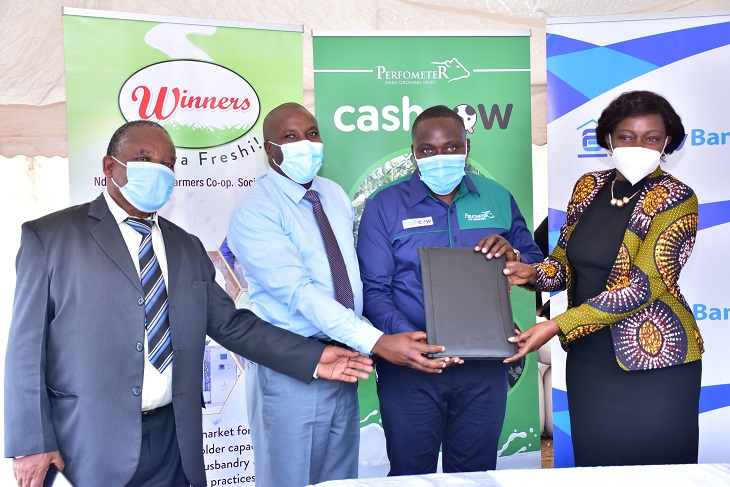 A thousand Ndumberi dairy farmers under the region’s co-operative society are set to access quality fodder to double their milk yield to 30,000 liters per day.

Through a fodder financing agreement between Family Bank, Performeter Agribusiness, and Ndumberi Dairy Farmers Co-operative Society, commercial fodder producers and cooperatives will access financing that will take away the working capital burden and increase availability and access to good quality fodder to all dairy farmers.

“It is remarkable that under the sub-standard conditions the dairy farming sector has had an annual growth of 3-4% annually with the dairy value chain having reached an estimated 1.9 billion dollars in value over with 1.2 million direct and indirect jobs,” said Family Bank Chief Executive Officer Rebecca Mbithi.

“With the onboarding of Ndumberi Dairy Farmers Co-operative and the cemented partnership with Performeter Agribusiness, we are assured of quality control in the fodder all the way to the milk, so that the benefit of our financing is spread to all the actors across the supply chain. As Family Bank, we continue to reaffirm our commitment of enabling people to create and sustain wealth through access to flexible and affordable financing services,” she added.

Speaking during the signing ceremony Perfometer Managing Director David Maina laid emphasis on the importance of access to quality fodder for the sustenance of the dairy sector.

“Our milk consumption per capita as a country is expected to surpass the milk production which could cripple a sector that forms the backbone of the economy. However, with convenient access to quality and affordable fodder the livelihood of farmers and quality milk production is set to improve,” he said.

It is estimated that at least two million Kenyan households with two to three cows contribute 80% of all the milk produced in the country annually. However, a stagnating dairy production in our country against an increasing milk consumption per capita is estimated at 7-8%.

“The improvement of our farmers’ livelihood through the increase of quality milk production is core to the co-operative. With the availability of quality fodder, we expect milk production per cow to increase from the current 14,000 – 19,000 liters to 30,000 liters per day. We look forward to this partnership bridging the core challenges in the sector,” said Ndumberi Dairy Farmers Co-operative Vice Chairman Peter Waititu.

This agreement comes six months after Family Bank partnered with Performeter and set aside KES 1 billion to support dairy co-operatives in the acquisition of fodder under the CashCow initiative, steered by the Kenya Dairy Board.