LG Awards Titus Ekiru As Sports Personality For May

Milan Marathon winner Titus Ekiru is the LG Sports Personality of the Month for May 2021. He was awarded by… 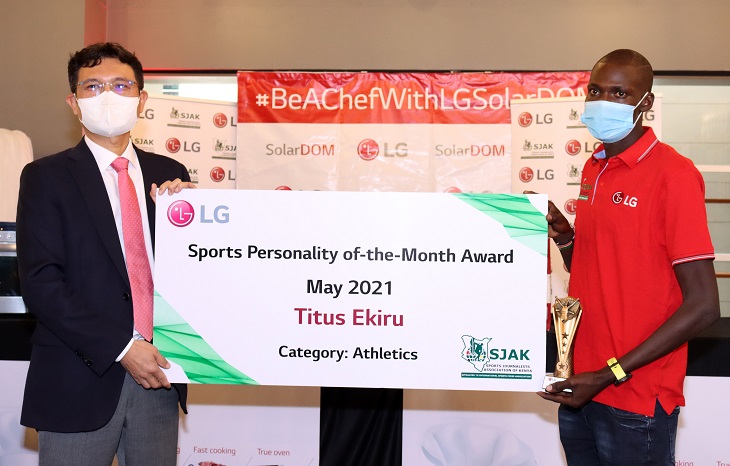 Milan Marathon winner Titus Ekiru is the LG Sports Personality of the Month for May 2021. He was awarded by LG Electronics East Africa Managing Director Sa Nyoung Kim, Ekiru went home with an LG SolarDOM Oven worth KES 65,000.

It is a 3-in-1 oven that is used for heating, grilling, and baking. The difference between the SolarDOM oven and other appliances in its class is that it does not require pre-heating, it is fast, and is energy efficient.

“LG partnered with Sports Journalists Association of Kenya to support the Sports Personality of the Month Award which recognizes promising Kenyan talent in sports,” Kim said.

An elated Ekiru said; “I Would like to thank LG/SJAK for this award. Winning the Milan Marathon and equalling Dennis Kimeto’s former world record against a strong field was a great source of joy for me, and this award is a pleasant and humbling surprise as I get back to my training program.”

“I am now motivated to push for a better time and hopefully the world record too,” added Ekiru.

The award comes after winning the Generali Milan Marathon for a second time on 16 May 2021 in a course record and world-leading time of 2:02:57 with second-placed Reuben Kipyego 58 seconds adrift.

This time improved the course record he set in 2019 of 2:04:46 by 1 minute 49 seconds, as he became the joint fifth fastest marathoner of all time.

His winning time went into the records as the fastest time run in a marathon in May and an Italian all-comers record.

Ekiru took the crown after a close challenge from 2019 U20 World Cross Country Champion Beatrice Chebet who won the Doha Diamond League meeting in a personal best and world-leading time of 8:2749 seconds.

Chebet sprinted to the finish line in the final 250 meters to beat a field that included world 5000 meters champion Hellen Obiri, Lilian Kasait, and Margaret Chelimo.

Among the nominees pipped by Ekiru to the gong in the month of May was Elias Ngeny who clocked a world-leading time of the 1 minute 43.84 seconds at the Athletics Kenya Pre-Trials at the Nyayo National stadium.

Others are weightlifter Winny Langat who took silver in the women’s 59kg division at the African Championships in Nairobi, and boxer Nick Okoth who won a bronze at the Konstan Korotkov Boxing Championships in Russia.

Ekiru joins the growing list of sportsmen and women to have won the coveted title this season.

The LG-sponsored award continues to whip up the enthusiasm of sports personalities across the country.

LG Electronics corporate communications manager Maureen Kemunto while congratulating Ekiru, noted that the company is proud to be a part of an initiative that rewards excellence.