Kenya has amazing talents. Well, apart from our politicians who seem to be talented in various fields including quoting of… 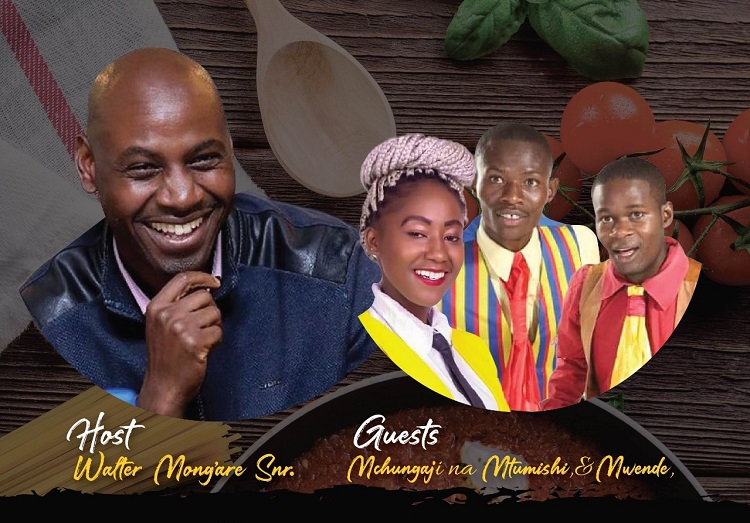 Kenya has amazing talents. Well, apart from our politicians who seem to be talented in various fields including quoting of Bible verses, all other Kenyans are talented in their own special way.

One of the areas that Kenyans are talented in is comedy. Many people see comedians on TVs and online platforms and think that that is the only thing they do for the rest of their lives. But what happens when comedians turn into cooks? It sound like comedy. Right?

In 1998, a few months after the terror attack on the US embassy in Nairobi that left a cloud of gloom in the country, a group of young men was desperately looking for ways to cheer up the nation.

Walter Mong’are and John Kiare were budding actors at Kenyatta University and they would take any opportunity to stage shows in the school halls. One evening, while rehearsing for their next show, they thought it would be a good idea to try something different. They wanted to stage a show on political satire, but they were worried about one thing.

“President Moi rendered himself. He had the power, vigour and phrases that would make good comedy. His way of talking was also distinct and we knew everyone would recognise it. We had not seen anyone do it before, so we were a little scared,” says Mr Mong’are.

One night, during the cultural week, an annual event held at the university, they decided to stage their standup comedy on political satire. The moment Mong’are, alias Nyambane, stepped on stage, donned in suit as was typical of Moi, complete with his signature rungu, the crowd went wild. Even before he could utter a word, the thunderous applause solidified what they had suspected. The people wanted that type of comedy.

“The reception was more than we imagined. A few weeks later, students were lining up ready to pay to watch our shows. It is not easy to get university students to sacrifice their money to watch their peers perform,” says Mong’are.

Another name featuring in this show is Lucy Mwende Kariuki. Who is she?

Lucy Mwende Kariuki, popularly known by her stage name, ‘Kayellow Yellow’ is the embodiment of grass to grace. The lass, who appears in Churchill Show in her multi-colored stage costume, accompanied by some funny makeup, reportedly used to work in Saudi Arabia as a housegirl.

The fast-rising comedian revealed that she worked in the desert country for about three years, before discovering a career in comedy by a twist of fate.

Her fans on social media noticed her great sense of humour, through her many posts on Facebook and urged Kenya’s King of comedy, Daniel ‘Churchill’ Ndambuki, to recruit her on his comedy platform.

Mwende consequently got her breakthrough when she competed in the ‘Ultimate Comic’ competition run by Churchill and Maisha Magic East from late 2017 to early 2018.

“I did not believe in myself but when I came back home, I found the ‘Ultimate Comic’ competition ongoing. I joined and the rest is history,” she stated.

Even though she may be a new face to some, she is most definitely a super-talented witty personality who has been cracking Kenyans for the past few years.

What about Mtumishi and Mchungaji? Do you know them?

Their real names are Gilbert Baraza and Josephat Mchasia ((Mtumishi and Mchungaji respectively). They were both street boys at one point of their lives. They used to walk all the way from Kawangware to Carnivore for Churchill Show auditions then stay the whole day without food

They are part of a group called Kreative Generations of 15 members. Mtumishi is the chairman and Mchungaji is the vice-chairman. Apart from Kreative art, the group also makes ornaments from beads besides greenhouse farming.

When they joined Churchill they did some Chinese translation for some time and people loved it, but when they experimented with comical music the reaction was phenomenal. They are inspired by Jim Carey, Mr. Bean, Churchill, Eric Omondi and Nyambane ( inspires their attire on stage)

Mtumishi comes from a single-parent family. After his parents separated, he dropped out of school in Form Two and became a street boy.

Mchungaji was taken in by his stepmother when his mom passed on and started working in a chang’aa distillery before ending up on the streets of Kakamega before coming to Nairobi where he started performing comedy on the streets, in crusades and weddings in efforts to survive.

Their survival secret in the industry: discipline, putting God first and support from other members of Kreative Generations. They also take comedy as a job and work very hard.

List Of Most Ordered Food Released By Uber Eats