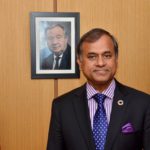 By Siddharth Chatterjee is a feminist as well as a humanitarian and development professional in the United Nations (UN). He is a UN Resident Coordinator to Kenya.

When the United Nations Population Fund (UNFPA’s) Goodwill Ambassador Ashley Judd, detailed an incident involving the Hollywood mogul Harvey Weinstein for The New York Times in their eye-popping investigation into decades of alleged sexual harassment, it came as a shock to many.

So now we know.

What started as a Hollywood scandal featuring a powerful man and a string of young women whose lives he had the power to shape has turned into a global shockwave revealing a staggering scale of harassment, misogyny, and violence.

Frankly, though, the fact that this problem is too big to sweep under the frayed edges of the world’s carpet has come as a surprise to only half the population. The other half knows what it is to have to fend off inappropriate remarks and unwelcome advances while fearing that doing so may jeopardize their careers.

Consider this. One in three women has experienced sexual harassment, violence, assault or rape in their lifetime. These statistics have been out there for years, but it took the Weinstein story to bring them into public consciousness.

The United Nations Commission on the Status of Women estimates that 35 percent of women worldwide have experienced either physical and/or sexual intimate partner violence by a non-partner at some point in their lives, with some national studies suggesting the figure may be as high as 70 percent.

Around 120 million girls worldwide have experienced forced intercourse or other forced sexual acts at, with current or former husbands, partners or boyfriends being the most common perpetrators. Around 700 million women alive today were married as children. Of those women, more than one in three—or some 250 million—were married before the age of 15.

Misogyny is deeply ingrained across the world. It feeds into a sense of entitlement by men that legitimises sexual harassment and sometimes violence. In some parts of the developing world, the culture of entitlement and gender inequality is so pervasive that women themselves buy into it. The World Bank Gender Data Portal shows that 76.3 percent of women in Mali and 92.1 percent in Guinea believe a man is justified in beating his wife if she goes out without telling him, neglects the children, refuses sex, burns the food or argues with him.

From Hollywood via the corridors of power in Westminster to New Delhi and Nairobi, we face a gender inequality crisis on an epic scale. Sexual and gender-based exploitation, harassment and violence is a global issue.

Sometimes the sheer size of a problem may engender a sense of hopelessness. Many people feel that climate change or poverty, for example, are just too big to solve; that the individual is powerless in the face of such scale and complexity.

But this is not the case here. There are things we can and must do. After all, while much of gender inequality is institutionalized in social, economic and political structures, it is individual men and boys who exploit, intimidate, harass and assault women and girls.

The first is home. In too many families across the world, boys are more valued than girls, and an attitude of ‘boys will be boys’ excuses much aggression, exploitation, and injustice. Husbands must set an example of respect for their wives. Parents must raise their sons to value girls and to respect their rights and autonomy. A girl’s body is her own. A boy has no right to comment on it or touch it uninvited, no matter what a girl might be wearing, or where she is.

The second front for action is education. Schools must teach respect and gender equality to both sexes. An organization that does just this is No Means No Worldwide, which partners with local organizations in Kenya and Malawi to work in schools. Girls are taught assertiveness and boundary setting, which is backed up with physical self-defense training. But boys are a crucial part of the scheme too. Dramatic changes in boys’ attitudes to girls and sex have been seen after only six sessions, and rape cases have fallen by 50% in some areas of Nairobi after the training.

The workplace is the third area of action. Victims of harassment or assault must be able to report their experiences without fear of retaliation on their careers. Workplace expectations and procedures must be clear and transparent, and action following a report of inappropriate behavior must be equally clear and transparent. The impunity that has lingered too long, aided and abetted by patriarchy, must no longer prevail.

Fourth, when inappropriate behavior becomes criminal behavior, women must feel confident that reporting the sexual crime will not add to their trauma. Police forces in many parts of the world have no special training in dealing with victims of sexual abuse and assault, and many do not take it seriously. They deserve to be treated with sensitivity and respect and need to know that police will investigate their cases and arrest perpetrators.

Finally, justice must be unrelenting and exemplary, in pursuit of individuals who commit such acts, regardless of their rank or station.

Most survivors of sexual harassment, violence, and exploitation are far from the glitz of Hollywood. Many are poor and ill-educated. Countless are growing up in cultures where their life chances are severely diminished simply by virtue of their gender and circumstance.

If the Weinstein story and its aftermath have shown us anything, it is that sexual exploitation and harassment is part of the everyday experience for girls and women no matter where they live in the world.

Getting Sporty With Sportika, Quenching The Thirst of Sports News

The Economy that Only Grows and Blooms on Paper

Dear Trump, A Message from the “Shit-Hole” Country